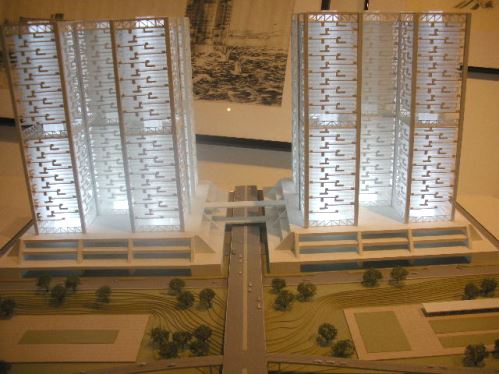 Last chance!  This weekend is the last time to see the fascinating exhibition Never Built: Los Angeles at the A+D Museum. An imaginative look at 100 ideas, renderings, blueprints, and models of buildings and parks proposed by visionary architects, designers and companies that would have altered the sprawl of the metropolis. The show is based on Sam Lubell’s book of the same name.

Some are wild ideas and some are exquisite. Many plans would have made LA standout with its architecture and gardens. Some addressed housing issues or suggested multi-use structures years ago and others offered green spaces such as the Olmstead Brother’s proposal for preserved landscapes–which they managed in Palos Verdes where shorelines are undeveloped. 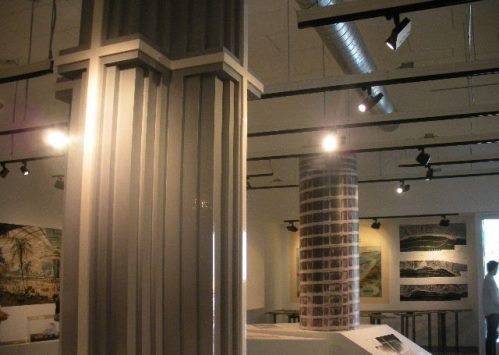 Frank Lloyd Wright’s soaring model for a church in the shape of a cross may have seemed like an egotistical monument but he also offered a comprehensive design for downtown office towers with a pedestrian plaza which also got nixed.

Conservative city fathers and cranky neighbors with limited views prevented some of these ideas from coming to fruition. Also conflicting business interests put the kibosh on a domed airport terminal with access to all the airlines, a bike freeway as well as an efficient monorail system that would have been erected for free decades ago. 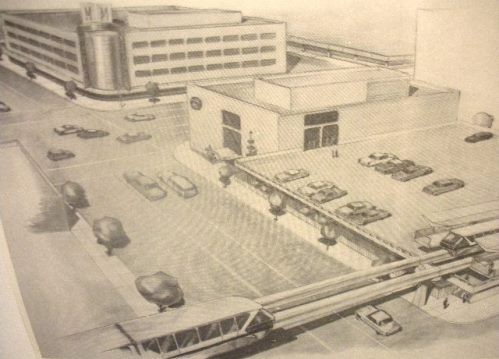 Monorail planned from the Valley to downtown and beyond stops at May & Co. building, the future home of the Academy of Motion Pictures Museum

Some sensible minds prevailed, too, in some cases. Would we really want artificial islands off the coast of Santa Monica obstructing the view of the sunset on the ocean from the shoreline? Unusual? 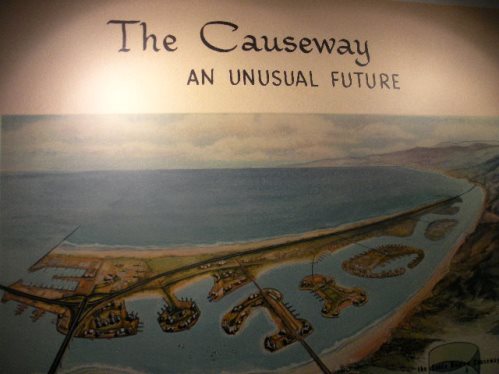 Santa Monica’s version of The Palm Islands of Dubai

The curators at the Architecture and Design Museum create big shows in a small space that are both intriguing and thought-provoking, such as the exhibit I wrote about on the Eames’ Appreciation of Common Objects.  These innovative concepts for Los Angeles were inspired–and it’s disappointing that some of these dreams never happened. See what it might have been.

"I'm a writer, but then nobody's perfect." - Billy Wilder Roberta Cruger, a journalist for more than 15 years, has contributed to an array of publications including Smithsonian, The Believer, HOW, Robb Report, and the Los Angeles Times magazine, websites such as Salon and Treehugger, and has written for National Geographic Traveler and in-flight magazines from Alaska Airlines to U.S. Airways. She was the founding editor of the media section at Creem magazine and worked in programming at MTV from 1981-'88. Her beats cover arts/culture and entertainment, the environment, design, food, and travel, and her books include the "Hungry? Seattle" guidebook and a chapter in the "Rock, She Wrote" anthology.
View all posts by Roberta Cruger →
This entry was posted in Art and Design. Bookmark the permalink.