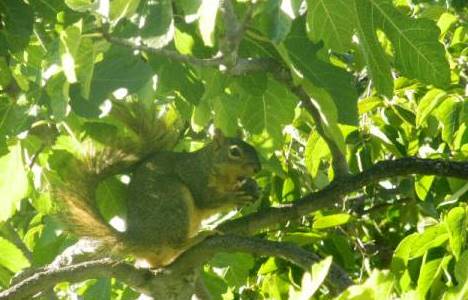 Squirrels polished off a bunch of figs from the tree in my yard this season. It was a bumper crop so I didn’t mind sharing. I’d watch as the critters held the fruit in their little paws and quickly chomped away, usually tossing about half away when full. I swear they even peeled away the skin, dining on the rich sweet fleshy part.

Then, they amazed me – they would wipe both sides of their mouth on a limb of the tree before scurrying off!  I might have thought this gesture was a fluke but it happened every time. Who knew they practiced such manners?

Now the squirrels are feasting on the Hachiya persimmons. Not as tasty as the Fuyu variety but just as juicy, so my furry neighborhood friends are still using the branches as napkins. Wild decorum.

"I'm a writer, but then nobody's perfect." - Billy Wilder Roberta Cruger, a journalist for more than 15 years, has contributed to an array of publications including Smithsonian, The Believer, HOW, Robb Report, and the Los Angeles Times magazine, websites such as Salon and Treehugger, and has written for National Geographic Traveler and in-flight magazines from Alaska Airlines to U.S. Airways. She was the founding editor of the media section at Creem magazine and worked in programming at MTV from 1981-'88. Her beats cover arts/culture and entertainment, the environment, design, food, and travel, and her books include the "Hungry? Seattle" guidebook and a chapter in the "Rock, She Wrote" anthology.
View all posts by Roberta Cruger →
This entry was posted in Green ways. Bookmark the permalink.